This year, we visited a few urban Dharma centres, and temples which promote meditation.

Suanmokkh Bangkok is certainly the most modern dharma centre we have ever seen, and extremely impressive. It is situated in north-central Bangkok on the edge of a lake in a municipal park. Entering the building is like entering an oasis of peace compared to the busy metropolis outside its grounds. There is a public meditation space which is circular and has public use meditation cushions along the walls and could accommodate about 40 people if seated around the walls and many, many more if seated in the centre as well. Electronic doors glide open noiselessly as you approach them, and there is a vestibule outside to keep your belongings and to act as a sound buffer. Another door leads to an outside sitting and walking meditation area above a section of the lake (shown in second photo here).

The 3 story building houses a dharma book shop, and information centre, and a larger space for day/weekend retreats which can also serve as a auditorium (pictured here being used by a Thich Nhat Hanh group), a large semi-circular outside sitting area for meditation courses which will accommodate at least 2-300. The urban centre is associated with the iconoclast monk Ajahn Buddhadasa’s southern Thai dharma centre of the same name, Suanmokkh (Garden of Liberation). Perhaps others of you have dreamed of an urban dharma centre in Victoria, I certainly have. 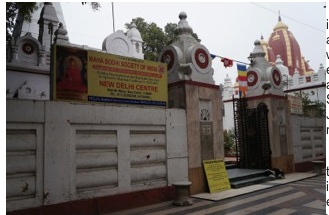 While in India, we visited an urban temple in central Delhi. In the 1930s, Indian industrialist Birla had the magnificent Lakshmi Temple constructed. Being a close associate of Mahatma Gandhi, the temple has a sign in front which noted that all were welcome; within the Indian context that meant untouchables were allowed to enter. Directly adjacent to the Lakshmi temple is the Buddhist Temple, which was also built with funds donated by Birla, and which is managed by the Mahabodhi Society of India. The corner stone was laid by the General Consul of Imperial Japan to British India, and three years later, in 1939, the temple was opened by no less than Mahatma Gandhi. 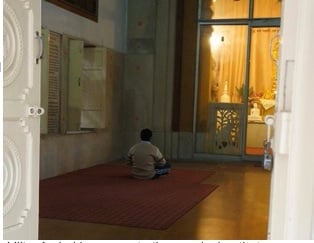 The temple teaches Vipassana meditation, and is open for meditation at any time (see photo). Although it was a brisk winter evening out in Delhi when we arrived at the Buddhist temple, it was warm inside and a very large group of Indian Buddhists had gathered there for a sermon. After the sermon the group presented robes to the monks, of a few different nationalities, who were present. Some little girls in the group ran up to us with the robes. We touched the robes and they ran off to offer them to more people present before being presented to the monks. By touching the robes we were being included in the gift of the robes by the sharing of the merit. I felt touched that the children in the group immediately included us despite the fact that we were clearly not a part of their group and foreigners as well. Some of the Indian Buddhist women had white saris with blue dharma wheels on the border, the colors of Ambekhar Buddhists, or new Buddhists. Ambekhar was a contemporary of Gandhi, and an untouchable. He was the first untouchable to receive a doctorate at a foreign university, and one of the key authors of the Indian constitution. Despite attempts by Gandhi to remove untouchability, and constitutional removal of untouchability, Ambekhar came to the conclusion that Hinduism was incapable of reform. He determined that the only way to remove untouchability was to remove the Untouchables from Hinduism. He converted to Buddhism in a massive ceremony during which a half million Untouchables followed him, in what is believed to be the largest event of religious conversion in human history. This mass conversion to Buddhism is celebrated each year in Nagpur by over a million Buddhists on 14 October. These groups now form a sizable Buddhist population within India, many have grouped under the Triratna Bauddha Mahasangha with support from the UK based Triratna Buddhist Community (formerly Friends of the Western Buddhist Order). The Mahabodhi Society of India, which manages the Delhi centre, was founded in the late 1800s by Anagarika Dharmapala with the mission to return control of Bodhgaya to Buddhists from the Vishnuvite Brahmans who then owned the temple. (Buddhists have never had full control of the Bodhgaya temple and today it remains under joint Buddhist/Hindu control.) 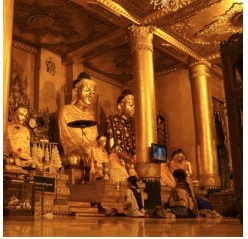 My all time favourite urban temple, without peer, is Shwedagone in central Rangoon. By odd coincidence, this is also my birth pagoda, astrologically. When your astrological chart is constructed by some Asian astrologers your pagoda is determined out of several major, ancient, ones in SE Asia. At all times of the morning, day and evening, it is possible to find people sitting in meditation in the temple grounds. Some, like the space pictured here are major open spaces where people come and go every few minutes, but many quiet corners have small areas set aside for meditation and the grounds are so large it is not difficult to find a corner to do some sitting and walking. They even have public use malas for people who use repetition for samatha meditation. It is situated on one of the highest points in the city, and its central pagoda is the landmark of the city. However, Rangoon could also be called a city of meditation centres. I don’t know the total number, but I know of at least a dozen urban centres solely devoted to the study of meditation, including the one built for Mahasi Sayadaw by Prime Minister U Nu and some of his cabinet in 1947, located, where else but Meditation Centre Road in the former capital.