Cave monasteries seem to be the flavour of the year for us. In January, subsequent to a 23 day retreat in Nepal, we visited Wat Tham Glongpaen – Cave Temple of the Meal Drum, so called for the 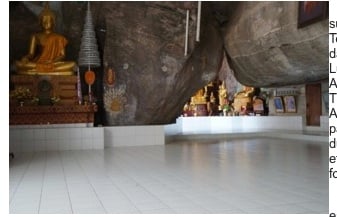 drum beaten to announce the singular daily meal eaten by forest dwelling monastics. This was the cave monastery of Luang Bu Kao Analayo, a former disciple of Ajahn Mun, in Northeastern Thailand. Ajahn Mun was considered to be one of the last great forest monastics in Thailand. Ajahn means teacher in Thai, it is derived from the Sanskrit Acharaya. Although Anitra met Luang Bu Kao Analayo

as a child, however, he has now passed away. He was considered to have reached a stage of enlightenment during his personal meditation practice. A small display contains his personal effects, all of which could be carried in a small bundle by a monk committed to the forest wandering practice, called Dhutanga.

Unlike the cave monasteries we visited earlier in central India, later cave monasteries in Southeast Asia tended toward deluxe. This one has a tile floor now (photo) and individual cells, running water and toilets! Nonetheless they haven’t lost their value as quiet and conducive meditation venues. 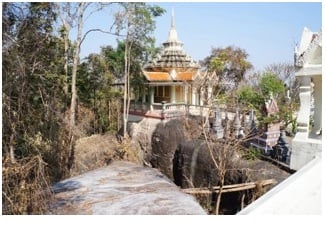 My favourite story of Luang Bu Kao Analayo’s teacher, Ajahn Mun, was that he would test the samadhi (concentration) practice of his students by sending them to sit on the tiger paths in the forest at night. Tigers like most carnivores smell for fear. If they smell fear, they know they can eat it, if they don’t smell fear, they move on. Samadhi, when strongly established in the mind, has the effect of eliminating fear. So if the student’s samadhi was well established the tiger would sniff for fear, and not finding any, move on, leaving the monastic unmolested and meditating peacefully… on a tiger path. He must have been fairly confident in the ability of his students since I never heard of him losing any……