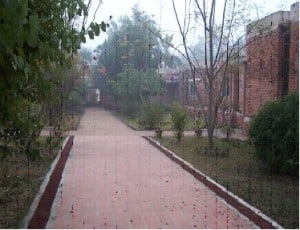 Sitting in the ‘holy land’.  Prepared by Yeshua Moser-Puangsuwan. Feb 2013.

Anitra and I just concluded a retreat in Lumbini, Nepal under the direction of Vivekananda, a German born Buddhist monk who is in charge of the Upandita associated meditation centre there.

Lumbini’s master plan required year-around meditation centre’s to be situated next to the sacred garden area. Visitors proceed from the busy parking area, along a reflection canal which bisects a monastic zone before passing the meditation centres to arrive at the site of the Buddha’s birth. The idea is to foster an increasing inner quietness as one proceeds to the sacred garden area.

The vipassana meditation centre here is open to meditators year-round, and meditators are encouraged to come for as long a period of intensive practice as their life will allow. We sat for just under a month. It is an intensive environment, designed to bring about deep understanding through the insight meditation process. Practice starts with waking at 4am, and continues through 10 at night. However this is considered the starting point, and as meditation practice deepens, meditators are encouraged to extend their practice beyond this basic schedule. Surprisingly this develops naturally, as the mind and body create and expend energy at a more balanced level the need for long sleep hours begins to fall away.  [Grounds of Panditarama Lumbini] 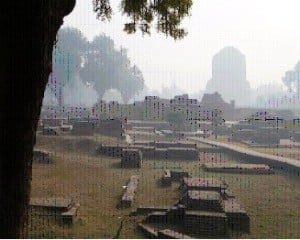 Practice at the Lumbini centre is supported by a dedicated staff, whose sincerity in creating a supportive environment is inspiring. Meals tend toward a western breakfast with cereals, bread, cheese, peanut butter, etc. Mid-day meals are a mix of western and Asian, frequently rice, sometimes noodles- either Asian or Italian. Many of the greens consumed, as well as fruit are grown within the compound. The centre is very international, and over 2000 meditators from 37 countries have practiced there since it opened in 1999. In 2011, Canadians provided the third highest number of meditators (behind Nepalis and US Americans). Vivekananda is a polyglot, and can fluently interview meditators in at least 5 different languages, as I have learned from listening to interviews either before or after me when going for meditation interview. [room at meditation centre 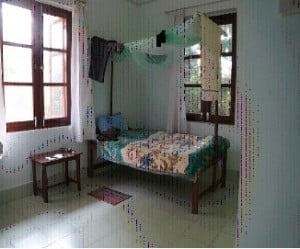 Meditation interviews take place every day except Saturday, with either Vivekananda or the resident nun. Live dharma talks are delivered 3 days a week, with taped talks on other days.

Anyone at VIMS interested in sitting at the Lumbini U Pandita centre is welcome to contact us for more information.

Lumbini is one of the key sacred sites for Buddhism, and many people arrive as pilgrims. The Buddha was ambivalent about followers visiting these sites. During the time the Buddha was alive, the ordained Buddhist monastics would travel to where he was once a year to listen to his teaching and pay their respects. As his life neared its end, his attendant Ananda asked where the community should go to pay their respects once he left his body. The Buddha replied, should they so desire, they could go to four places associated with his life, Lumbini where he was born, Bodhgaya where he attained Nibbana, Sarnath where he first shared his understanding of the Dhamma, and Kushinagar, where he passed away. However, he neither required nor recommended it, he just said if they wanted to, they could do it. Many do. We have, at one time or another, visited all four of these sites. This year we visited two additional ones- Kapilavastu and Kudan. Kapilavastu was the site of the royal capital of the Buddha’s father, where he grew up as a prince, a life he later fled. We sat at the unearthed eastern gateway out of which legend has it that he left the royal life behind – the ‘going forth’.

When I heard of a ‘kingdom’, somehow I was expecting a vast area. Kapilavastu is relatively small. Its walls are well defined, and it is about 450 meters by 550 meters, or about one square kilometre. The world was a much smaller place 2500 years ago. I would guess from what I saw that maybe a few hundred people lived within this settlement? Who knows how many in surround villages. Other ‘kingdoms’ mentioned within Buddhist sutras and stories are not far away some 30 kilometres in one direction or another. Given the small land areas and number of people involved it might more seem like these were tribes and feudal chiefs. Clearly there were many of them over the provinces that make up this area now split between the modern states ofNepalandIndia. Today there are more monks inBangkokthan there was in the entirety of the Sangha at the time of the Buddha. The entire population of the area near Kapilavastu, at that time, was estimated to be less than the population ofBritish Columbiatoday.

Kudan is a place which is linked with at least three events in the Buddha’s life in the stories which come down to us, it is the place where he finally met his father after becoming the Buddha, the place where his mother offered him robes, and the place where his son, Rahula, was ordained. It is about a 10 minute drive south of Kapilavastu today, probably would have been a two hour walk in the time of the Buddha. There are the remains of a small monastery and pagoda there.

Our meditation in Lumbini over, we crossed the border to India and traveled to Sarnath, where we stayed in pilgrims accommodation at a monastery. Most monasteries at the key pilgrimage sites make accommodation available to pilgrims for donation. There is a spot in Sarnath which believed to be the site where the Buddha stayed once he settled there for a time. We sat in meditation at this spot. Groups from many countries came to chant and spend some time in meditation here. I can faithfully report that no great attainment occurred while sitting there, but it felt good to do so. [Sarnath, overlooking the place where the Buddha was said to have stayed, myself mediating (trying anyway) within the confines of the remains of the room where the Buddha was reputed to have stayed] 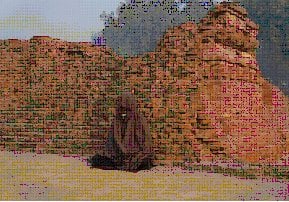